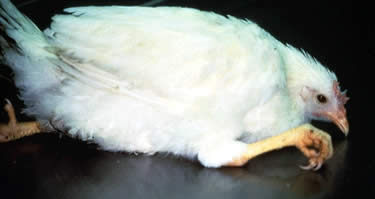 Marek’s Disease Virus (MDV) is a highly contagious viral infection that predominantly affects chickens but can also affect pheasants, quail, gamefowl and turkeys. It is one of the most common diseases that affect poultry flocks worldwide. Clinical disease is not always apparent in infected flocks, however subclinical disease is often more economically important as it reduces weight gain and egg production. Mortality rates can be very high in susceptible birds. Marek’s Disease (MD) results in enlarged nerves and in tumour formation in nerve, organ, muscle and epithelial (cells that line the internal and external surfaces of the body) tissue. Clinical signs include paralysis of the legs, wings and neck, weight loss, grey iris or irregular pupil, vision impairment and the skin around feather follicles can be raised and roughened. Affected birds are immunosuppressed and as a consequence are more susceptible to other infectious diseases.

The clinical signs associated with MD can look similar to those caused by Lymphoid Leukosis and Reticuloendotheliosis, however, the rareness of bursal tumours with MD helps distinguish this disease from Lymphoid Leukosis. Also, MD can develop in chickens as young as 3 weeks old, whereas Lymphoid Leukosis is typically seen in chickens older than 14 weeks old. Reticuloendotheliosis, although rare, can easily be confused with MD because both diseases feature enlarged nerves and T-cell lymphomas (a type of tumour that involves white blood cells called T-cells, which are part of the active acquired immunity system) in visceral (soft internal) organs.

MD is caused by a highly cell-associated (virus particles that remain attached to or within the host cell after replication) but readily transmitted herpesvirus. The route of infection is usually respiratory. The serotypes that exist are ‘virulent’ (disease causing) chicken isolates (serotype 1) and ‘avirulent’ (non-disease causing) chicken isolates (serotype 2). The avirulent virus that is commonly found in turkeys is designated serotype 3.

Serotypes are identified by reaction with serotype-specific monoclonal (clones from a single cell) antibodies or by biological characteristics such as host range, pathogenicity (severity of disease), growth rate, and plaque morphology (the physical appearance of laboratory grown viral cultures). Currently, virulent serotype 1 strains are further divided into pathotypes (classification based on the severity of disease caused by that particular strain of virus), which are often referred to as mild (m), virulent (v), very virulent (vv), and very virulent plus (vv+) MD virus strains.

The virus matures into a fully infective, enveloped virus in the cells that line the feather follicle and is released into the environment in dander (small scales from feathers which flake off and can become airborne). The virus may also be present in faeces and saliva. When cell-associated, the virus may survive for months in poultry house litter or dust and is resistant to some disinfectants. Infected birds become carriers of the virus for life and are a source of infection to susceptible birds. A Poultry CRC epidemiological study has revealed that MDV is less prevalent in the environment than previously thought, however, it is long lasting and remains infective in dust despite wide variations in atmospheric temperature.

Prevention and treatment of Marek’s Disease

There is no treatment for MD. Vaccination is the central strategy for the prevention and control of MD. While vaccination will prevent clinical disease and reduce shedding of infective virus it will not prevent infection. Cell-associated vaccines are generally more effective than cell-free vaccines because they are neutralised less by maternal antibodies. Over time, increasingly virulent strains of MD virus have emerged, which has resulted in an ongoing need to develop new vaccines and vaccination programs to combat the disease. It was found that better protection from MD was obtained when certain combinations of serotypes were used together in a vaccine rather than one serotype alone (protective synergism). This phenomena, which is unique to MD and is strongly serotype specific, has led to the development of polyvalent vaccines (vaccines containing more than one vaccine strain). The efficacy of vaccines can be improved by strict sanitation to reduce or delay exposure and by breeding poultry for

genetic resistance to MD. Vertical transmission (from parents to offspring) is not considered to be important. Vaccines administered at hatching require 1-2 weeks to produce an effective immunity, therefore exposure of chickens vaccinated at hatching to virus should be minimised during the first few days after hatching. Vaccines are also effective when administered to embryos at the 18th day of incubation. In ovo vaccination (vaccination of the embryo prior to hatching) is now performed by automated technology and is widely used for vaccination of commercial broiler chickens, mainly because of reduced labour costs and greater precision of vaccine administration.

The history of Marek’s Disease control in Australia

In the early 1970s, the success of vaccination against MD became apparent in other countries but Australian quarantine restrictions prevented the importation of any international vaccines. This necessitated the development of a local vaccine. In 1974, field trials began using an Australian isolate of herpesvirus of turkeys (HVT). This serotype 3 vaccine was shown to be safe and gave overall protection of 85.2%, which compared favourably with results reported in other countries. Vaccination with this strain was very effective and controlled MD in Australia until about 1980. HVT is generally produced as a cell-associated form of the vaccine. A cell-free form also exists but is less protective than its cell-associated counterpart.

Despite the availability of serotype 1 and 2 vaccines in other countries, HVT was the most commonly used vaccine throughout the world until the late 1970’s when MD outbreaks of increasing severity were reported in vaccinated chickens. Viruses isolated at this time were classified as very virulent Marek’s Disease viruses (vvMDV). The discovery of protective synergism (better protection when combinations of serotypes were used together in a vaccine rather than each serotype alone) between Marek’s Disease vaccines prompted the use of bivalent vaccines (a mixture of two vaccine strains) containing serotypes 2 and 3.

MD continued to be widespread in Australia, with disease outbreaks despite vaccination programs during the 1980s. Consequently, an Australian cell-associated serotype 2 vaccine “Maravac”, which was licensed for sale in 1977, was used alternatively with HVT or in combination. 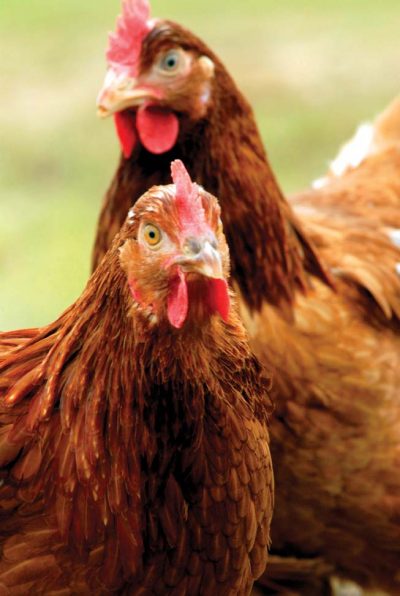 In the early 1990s, despite the use of Maravac, polyvalent vaccines and increased doses of HVT, an increase in the prevalence of MD was once again observed. During this time, imported breeds of chickens became available in Australia. The influx of imported pullets into Australia coincided with increases in MD mortality to over 50%, which had never been seen previously in Australia. Field and breed comparison trials demonstrated that imported breeds were responding poorly to Australian-derived MD vaccines. The incidence of MD in imported breeds appeared to be higher than in existing Australian strains of birds.

In view of this situation, and the emergence of strains of increased virulence, changes in vaccination strategies included the vaccination of broiler chickens, previously not routine practice in Australia.

Due to concern from the Australian poultry industry over the apparent failure of Australian vaccines, a meeting was convened by the vaccine manufacturer, Websters, and the Australian Veterinary Poultry Association (AVPA) in 1993, where the industry reported to the government and vaccine manufacturers the full extent of MD in Australia. Websters proposed that a serotype 1 vaccine be imported from overseas. This option was unpopular with the majority of the poultry industry and instead, the industry decided to increase its funding of MD research, particularly aimed at providing evidence that a serotype 1 vaccine would give better protection than existing Australian vaccines and to develop an Australian serotype 1 vaccine. An Australian serotype 1 vaccine was developed by RMIT with industry funding, however, prior to the commercialisation of the vaccine approval was given for the importation of the Rispen’s serotype 1 vaccine. The Rispen’s vaccine is derived from a mildly virulent serotype 1 MDV isolate which was further attenuated (weakened) by 20 cell culture passages. Rispen’s vaccine has been used extensively for protection against MDV strains of very high virulence. It has been shown to be mildly virulent for highly susceptible lines of chickens and maintains its ability to spread by contact. Bioproperties now has an important role in importing Rispens vaccine.

The introduction of the Rispen’s vaccine to the Australian chicken industry has lessened the need for an Australian serotype 1 MD vaccine. Nevertheless, the RMIT vaccine seed has been stored as it may be useful if further change occurs in the evolution of MDVs. Since the RMIT vaccine virus is derived from an Australian isolate, it may share more antigens with recent strains. The Rispen’s vaccine was derived from a mildly virulent serotype 1 MDV isolated in the 1970s in The Netherlands and, as such, may not possess antigens common to recent Australian strains.

Trivalent combinations of all three serotypes were introduced in 1990. As of 2004, trivalent vaccines were available in the USA, recommended only for high risk flocks, but were not available in Australia. Using fowlpox virus and herpesvirus of turkeys as vectors (an organism that does not cause disease itself but which spreads infection by conveying pathogens from one host to another), experimental recombinant (genetically engineered to contain DNA from different organisms) vaccines have been shown to be effective against challenge with virulent Marek’s disease virus. As of 2004, recombinant vaccines were not commercially available.

For an existing farm, other than providing clothing for visitors (disposable overalls) and using hard fibre based litter materials (wood shavings), risk can be reduced by being aware that there is a higher seasonal incidence of MD in Summer/Autumn, which peaks in March. This being so, it is important to vaccinate broiler flocks that will mature at the end of Autumn, not just those grown for the Christmas market. In terms of biosecurity, it is more economically feasible to provide disposable overalls for visitors than to clean vehicles between farms as cleaning vehicles does not reduce the spread of MDV.

The Rural Industries Research and Development Corporation (a core partner in the Australian Poultry CRC) is investing in a new project to develop a DNA based test to quickly differentiate between wild-type MDV and MDV from the Rispens vaccine, commonly used to vaccinate broiler-breeders and layers. Armed with this test, it will be possible to ascertain if MDV on farms is caused by spread of the vaccine amongst the progeny of broiler-breeders or if it is a potentially dangerous wild-type. Meanwhile the Poultry CRC will also look into the possibility of arranging a comparison between the international reference strains of MDV with the known Australian strains to establish, once and for all, just how virulent the Australian strains are. This knowledge will help in the development of new vaccines against MDV. Given that this work involves moving a highly pathogenic virus between countries, it will be carried out at either an Australian or overseas laboratory with the highest possible levels of biosecurity.