Geese are classified as a ‘waterfowl’ of the order Anseriformes, family Anatidae. This family also includes ducks and swans. They have medium to large bodies and are strong swimmers. Historically they have been an important food source, and are currently raised as poultry for both meat and eggs. 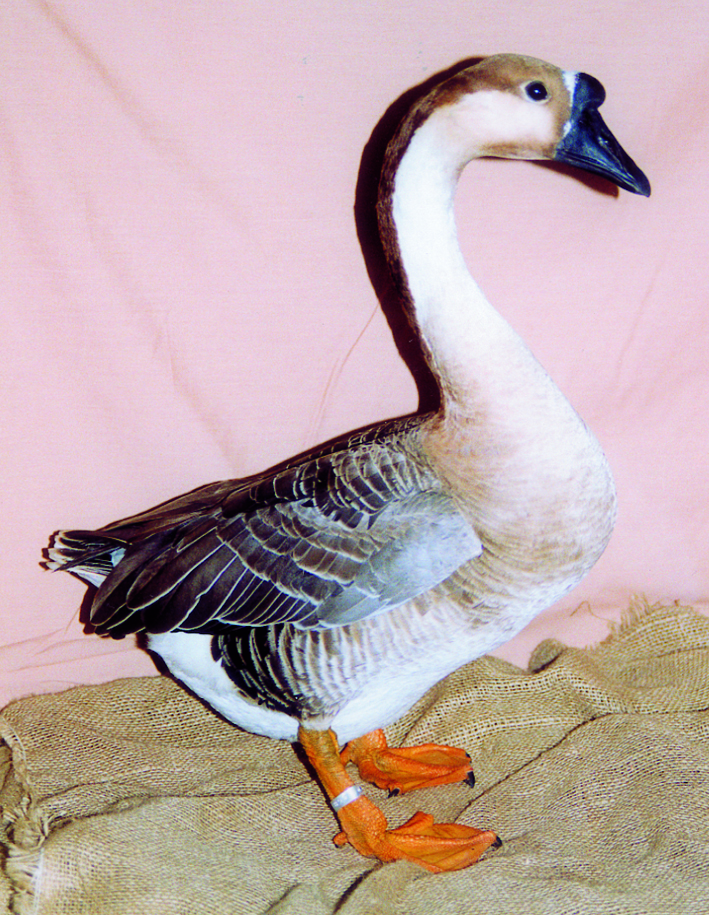 The domesticated Chinese goose is descended from the wild Swan goose (as is the African goose) and their large size (5-10 kg in males; 4-9 kg in females) distinguishes them from the wild breed. The domesticated breed also often have a large basal knob on the upper side of their bill, which is more prominent on males than females and can be used for sexing at 6-8 weeks of age.

There are two varieties of the Chinese goose; the brown (which is similar to the wild Swan goose) and the white. The brown is tall and graceful with a blackhead knob and beak, with a long and slender neck, and are known to make good ‘watchdogs’. The white Chinese goose has an orange head knob and beak and orange-yellow legs.  The breed standard defined in the American Poultry Association’s ‘Standard of Perfection’ requires that the Chinese goose be a tall, slim bird. However, many domestic Chinese geese have a similar body type to other breeds.

Both the brown and white varieties are good laying birds, as the female can lay 50-60 eggs during the breeding season. There are reports of Chinese geese laying up to 100 eggs during the same period.

Brown or grey has a brown stripe extending from the base of the knob to the body. Colours are a variation of brown. Brown is more common in Australia. There is also an all-white variety.

The domesticated Embden goose is thought to have originated from Holland and/or Germany. The Embden plumage is pure white, however, the bill, feet and shanks are orange. They have blue eyes, short legs, a long swan-like neck and a broad, well-rounded body. They are large (14 kg for the male, 9 kg for the female), fast-growing birds.

The Embden is a very hardy breed and are known to be good foragers and are generally good layers (approximately 40 eggs laid during the breeding season). 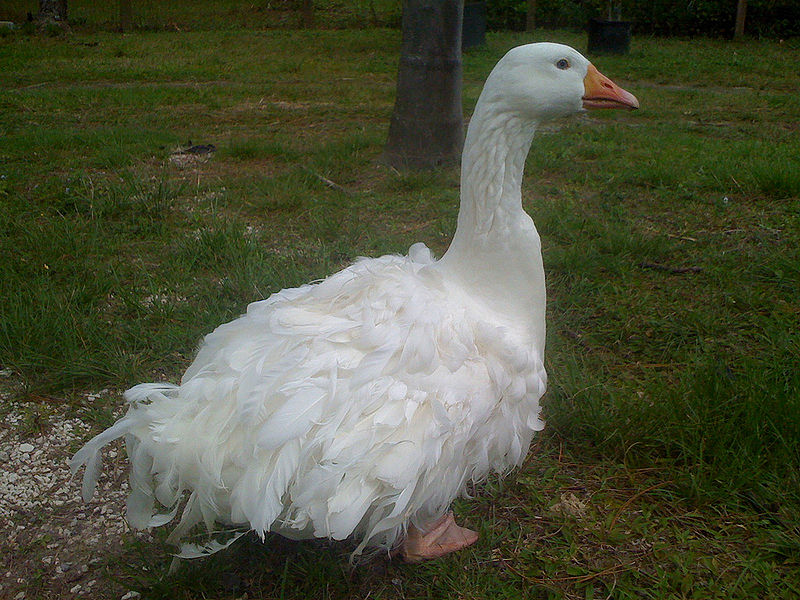 The domestic Sebastopol (also known as Danubian) goose is descended from the European Greylag. They are predominantly bred for ornamental purposes as the plumage on their body is long, white and curly. Due to the curliness of the feathers, Sebastopol geese cannot fly well (even more so than geese in general). Depending on the cross-breed, the feathers on the breast may also be curly, the feathers of the neck are smooth and sometimes greyish-brown and the legs and shanks are orange. Both the female and male Sebastopol grow to approximately 5 kg, which classifies them as a light goose breed.

On average the females produce 25-35 eggs per year. Sebastopol require an adequate water supply in order to keep their feathers clean. They are not aggressive and tend to be broody. 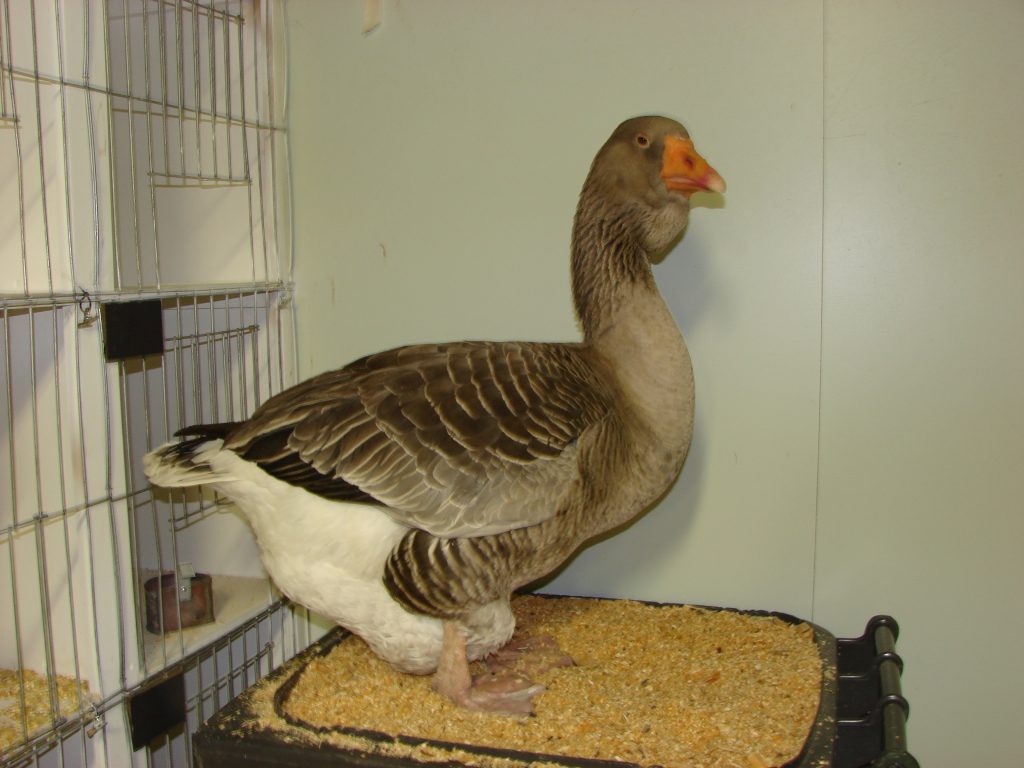 The origins of the Toulouse goose as its name suggests – is near Toulouse, France. It is a large breed, and the male can weigh up to 12 kg and is mostly known for its large dewlaps (flap of skin that hangs under its beak and head). There are records of this goose as far back as 1555, at which stage it was solely the grey-coloured breed. The breed was introduced to the UK in 1840 and selectively bred to produce a massive goose by the 1900s. The Toulouse goose breed in France have never been bred to the same size as found in the UK, despite the greater numbers of Toulouse kept in France. This breed is a moderate layer of eggs, producing as well as any other goose breed, however, the Toulouse is selected for meat and it is the preferred goose for the production of pate de foie gras (liver pate).

This breed of goose has a placid disposition which means that it does not generally thrive in mixed flocks, especially with more active or aggressive birds. Any increase in stress can result in a reduction in mating and feeding. The Toulouse goose generally stays close to home and does not wander, which makes them an ideal choice for a large garden or orchard. There is a broad range in individual goose disposition, as some geese can become severely aggressive and therefore thrive in mixed flocks, while others will be placid to the point that they prefer to follow smaller ducks as opposed to other geese. They do not need access to a body of water, however, they mate, and enjoy bathing and playing, in water.

The plumage of the Toulouse varies through different shades of grey, however, each feather has white edging. Their undercarriage and tail are white, and they have a broad body with prominent breastbone. There are two varieties in Australia – medium size and the very heavy. Mating and fertility can be a problem with heavy ganders.

The grey, the buff, the white. Other than colour, all types are similar.