Home » All About Poultry » Husbandry & Management » Robotics in the Poultry Industry

Robotics in the poultry industry

This article describes some of the current and future uses of robotics in the poultry industry. Right now, you might be thinking “This isn’t relevant to me; there are no robots in my chook shed”. In fact, in the modern egg industry, robots are commonplace. Amongst other tasks, robots feed the birds, transport, handle and pack eggs and manage shed ventilation. In the chicken meat processing sector, robots perform tasks such as automatic transfer of carcasses and detection of defective carcasses. The utilisation of robots is expected to increase in the future as other capabilities are developed that improve the ability to remotely monitor birds. 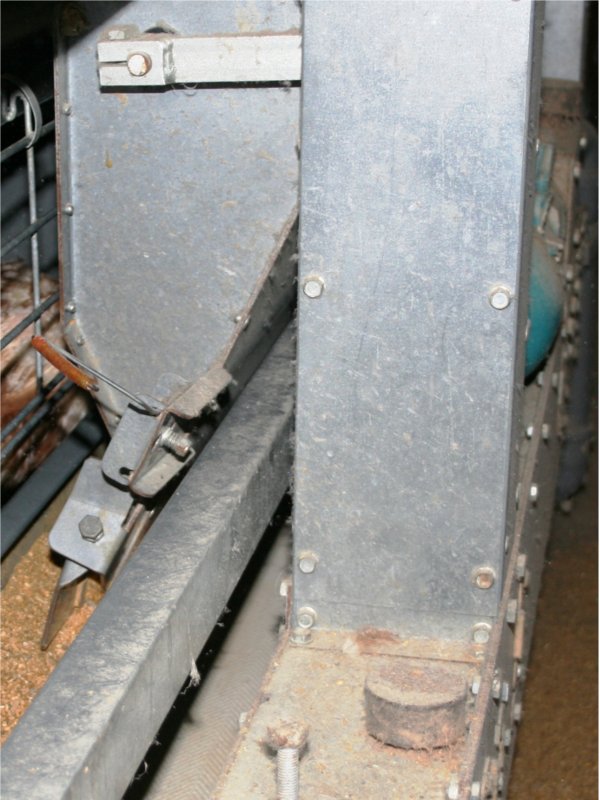 What is a robot?

Robotics, the engineering science and technology of robots, involves the design, manufacture and application of robots. A robot is any machine that performs repetitive tasks with some degree of automation. Robots are used in many different industrial situations to relieve human physical and/or mental effort while improving efficiency of production. Equally important, robots can work in situations that may be hazardous to humans.

An example of a robotic process in the modern cage egg industry is the use of integrated conveyor belts to collect and transport eggs to the packing room. Conveyor belts eliminate the need to handle eggs, which is especially relevant in modern sheds with tiered cages. Egg collection via conveyor belts also reduces OH&S risks associated with manual egg collection at heights and under low levels of illumination.

What can robots do for the poultry industry?

Many tasks in the poultry industry were traditionally labour intensive and involved repetitive actions by stockpeople, for example checking birds for health and welfare, feeding birds, collecting eggs and removing manure. Some tasks also involved heavy lifting. While mechanisation enabled some of these tasks to be performed more easily, other tasks have been automated completely, reducing the need for close supervision by humans. For example, feeding birds, removing manure and collecting, counting, grading and packing eggs has been largely automated in the modern egg industry. In broiler production, hatched chicks can be automatically transferred from the incubator to the broiler shed floor and bird growth can be monitored using automatic weighing platforms. Information from the weighing platform has improved the precision management of the birds for their feed or environmental requirements. Robotics is also applied to controlling the shed environment. Fully automated systems are controlled by a computer which monitors various sensors for temperature, humidity, gas levels and so on. Ventilation is managed by the computer to maintain the environmental parameters within the desired comfort levels.

Advancing robotics in the poultry industry

Robot capability can range from semi-automatic to fully automatic. An example of a semi-automatic system is the collection of eggs via a conveyor belt system. Although the system may automatically count the number of eggs passing a specific point, the robot does not make decisions about how it should operate. 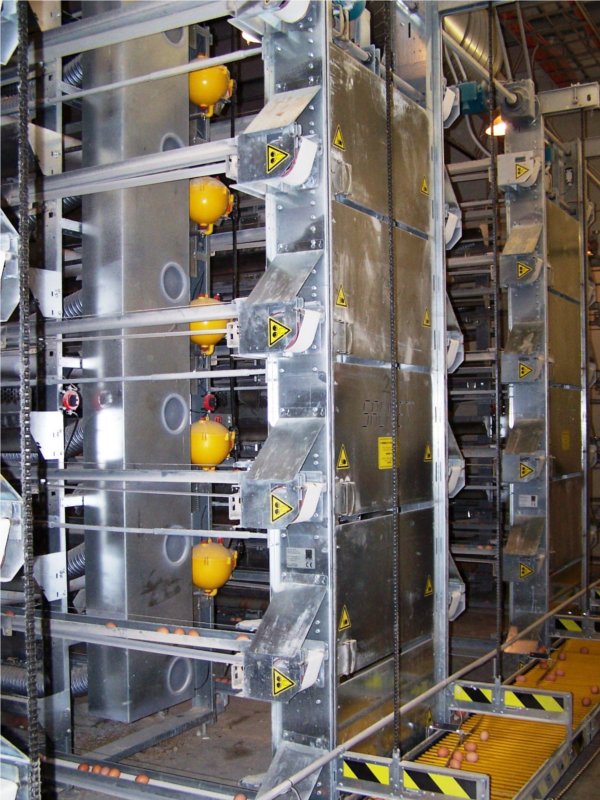 For example, the back-up of eggs is not detected. Should a problem occur with the egg collection or transfer process, the human operator must take control. An analogy from everyday life would be the cruise control facility in your car. Once the cruise control is engaged, the car won’t slow or stop unless the driver switches it off or touches the brake pedal.

Fully automatic capability involves autonomy of decision-making. Returning to the cruise control example, imagine the car has advanced cruise control capability. Sensors at the front of the car detect the presence of vehicles ahead and adjust the car’s speed when approaching a slower moving or stationary vehicle. At least one automated egg collection system includes sensors under the egg collection belt to monitor egg weight at specific locations. These are often at critical points such as in front of nest boxes. The information is provided to the robot’s computer control system, which has been programmed to estimate the number of eggs at the location based on weight. As the number of eggs increases so does the risk that extra eggs added to the pile may crack or break eggs, thus reducing product quality or quantity. The robot is programmed to respond to the increased egg weight by moving the egg collection belt forward a short distance to reduce the risk that additional eggs don’t roll into the pile and cause a problem.

The most advanced robotic systems may incorporate some form of artificial intelligence, aided by computer vision capability. One or more cameras provide digital images to the robot’s computer which processes the information, using it to make decisions. As part of a recent Poultry CRC proof of concept project on ‘computer vision’, a robotic system was developed that can scan the egg collection belt for potential blockages. The robot’s software could differentiate between eggs and non-egg objects with 95% accuracy. An important benefit of such as system would be that the robot could inspect every egg collection belt, even those above eye level of stockpeople, before the conveyor belt was allowed to transport the eggs to the packing area. Thus, the risk that a blockage of eggs could occur on the conveyor belt (with subsequent loss of eggs and labour time for cleaning up the mess) could be greatly reduced. A second component of the Poultry CRC proof of concept project investigated whether computer vision could also be used to count hens in cages. This was the first step in a process to develop a robotic method for monitoring the health and welfare of hens. Millions of birds (layers and broilers) are maintained in various housing systems, so a reliable, automatic method to improve surveillance of large numbers of the birds is very relevant. Robotics may be the answer, but the challenge is to determine the best way for this to be done. The capability of remote sensing technology for measuring biological parameters indicative of production efficiency is improving. Such data can be streamed to computerised control systems which assess the information and instruct the delivery of precise nutrient requirements, or the manipulation of environmental conditions, etc., for optimal performance of birds. Through integration of the production and health and welfare measures, farm managers would be able to continuously monitor and micro-manage their birds for optimal health, welfare and performance. 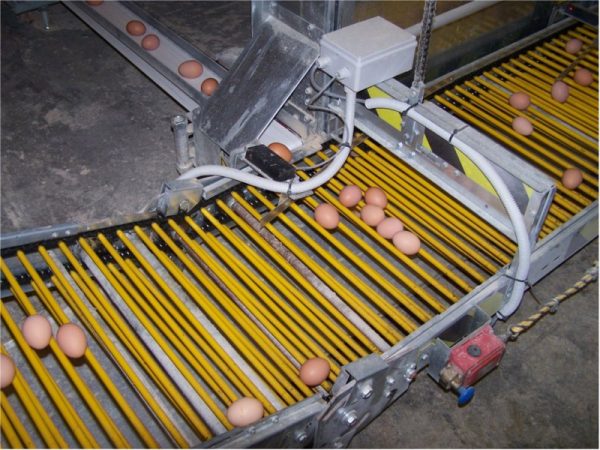 The challenge for the poultry industry is to recognise which components of the production system can be monitored and controlled by robots (machines), and which technology is appropriate to achieve improved efficiency. If technology is not available, it may need to be developed. The next step would be to test whether this or similar technology could be extended to monitor the health and welfare of the birds. A key question is ‘What parameters can be measured (remotely/wirelessly) that reliably inform us of the animals’ internal health, welfare and production states?’. Following that, there are likely to be challenges around computer capability. Coping with the massive input of data may be problematic, especially if the monitoring systems provide a continuous stream of real-time information. It is likely that robots won’t be able to monitor all birds, so attention will need to be focussed on sentinel birds. There are also many technical issues to resolve with regards to this issue also, such as identifying and tracking specific birds, especially under low light levels and the issues of lack of contrast between subject and background. If it is necessary to attach remote sensing transponder devices to sentinel birds, improved battery performance will be required for long-term effective use. Perhaps finally, would welfare groups accept the use of robots if their preference is for increasing the ratio of stock people per bird? 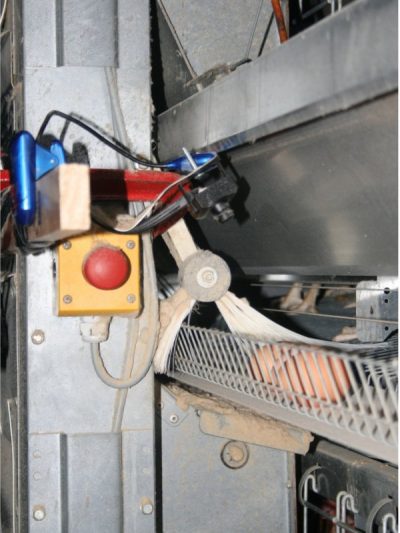 Rapid advances are occurring in the application of robotics to the poultry industry. Robotics has contributed to improved production efficiency, particularly from the perspective of reducing labour costs per bird. Due to the intensive nature of most poultry enterprises, the industry is ideally suited to continue to benefit from the incorporation of robotics. As I see it, a major challenge for the future is how to apply robotics to monitor bird health and welfare.

Original article by Dr. Greg Cronin at the University of Sydney