Voluntary control occurs where the animal, in its response to some activity or stimulus, has a choice in what actions (if any) it may take. It chooses to respond in one way or another, such as to move a particular part(s) of its anatomy. The nerves that make up this voluntary part of the nervous system are called voluntary, or somatic, nerves.

Involuntary control exists where the animal has no choice and the response to an activity or event occurs without the animal having any conscious control. Examples of the functioning of this part of the nervous system are the regulation of heart beat and circulation, digestion, and respiration. It is obvious that the animal cannot afford to have to remember to keep its heart beating, its digestive system functioning or even just to breath. The part of the nervous system that regulates such important functions is called the autonomic, or involuntary, nervous system. 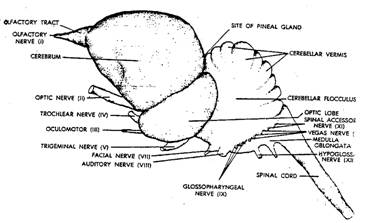 Lateral view of the chicken brain

The brain is located in the head and is well protected by the bones of the cranium. The brain consists of a number of parts, which in turn consist of various special cells that have the ability to detect, recognise, remember and direct. Thus the brain is the control centre for the many functions and activities of the many systems, organs and tissues that make up the bird’s body.

The parts and major regions that make up the avian brain are as follows:

The olfactory lobes of the forebrain are the receptor areas for the olfactory nerves and are the centre for smell, while the optic lobes are the receptor areas for the optic nerve and are the centre for sight. The optic lobes of poultry are very large when compared with those of other species in relation to total brain size. This indicates that sight plays a major role in the normal behaviour of fowls.

The very small gland called the pituitary gland, or hypophysis, is associated with the hypothalamus. This gland is of major importance as an endocrine gland, so much so that it is often called the “master” gland. Many of its secretions regulate the operation of many other glands as well as the functions of the systems, organs and tissues of the bird.

The spinal cord, as the name suggests, is a cord of nerve tissue that extends from the medulla oblongata of the brain along almost the full extremity of the vertebral column through the canal provided for that purpose. The spinal cord and the brain constitute the Central Nervous System (often referred to as the CNS). Like the brain, the spinal cord is well protected, firstly by its spinal fluid and the sheath that encloses it, all of which is fully enclosed within the bones of the vertebral column. The various nerves that provide for the control of the various systems, organs and tissues of the body leave the spinal cord through appropriate openings located in the joints between the different vertebrae.

If the spinal cord should be broken, the connection between the brain and the parts that it controls will be broken and hence control of the effected parts will be lost. For example, a break of the spinal cord in the lower back will result in the loss of control (paralysis) of the legs and other functions that take place below the break.

The nerve cell or neuron consists of a cell body with one or more elongated projections extending from it. The cell body contains the nucleus. The projections are part of the cytoplasm and are called axons if they are long and singular, or dendrites if they are short and branched. Nerve endings or receptors at one end carry the sensors that respond to the stimuli, while on the opposite side, the stimulus is transferred ultimately to the brain. The nerve endings are the means by which stimuli are perceived or control exercised. The remainder of the nerve cell acts as a message carrier to the brain in much the same way that telephone line carries a message between two telephones. These messages are in the form of very weak electrical currents.

There are a number of different types of nerve endings on nerve cells depending on the task they have to carry out, such as smell, hear, see or perceive touch. The bird may then react to these stimuli and the response is directed via the nerves of a particular system, organ or tissue. Those that send messages to the muscles to respond are often called “motor nerves” or “motor neurons”. The types of nerve endings associated with touch include those specifically for pain, touch, cold, heat and pressure. 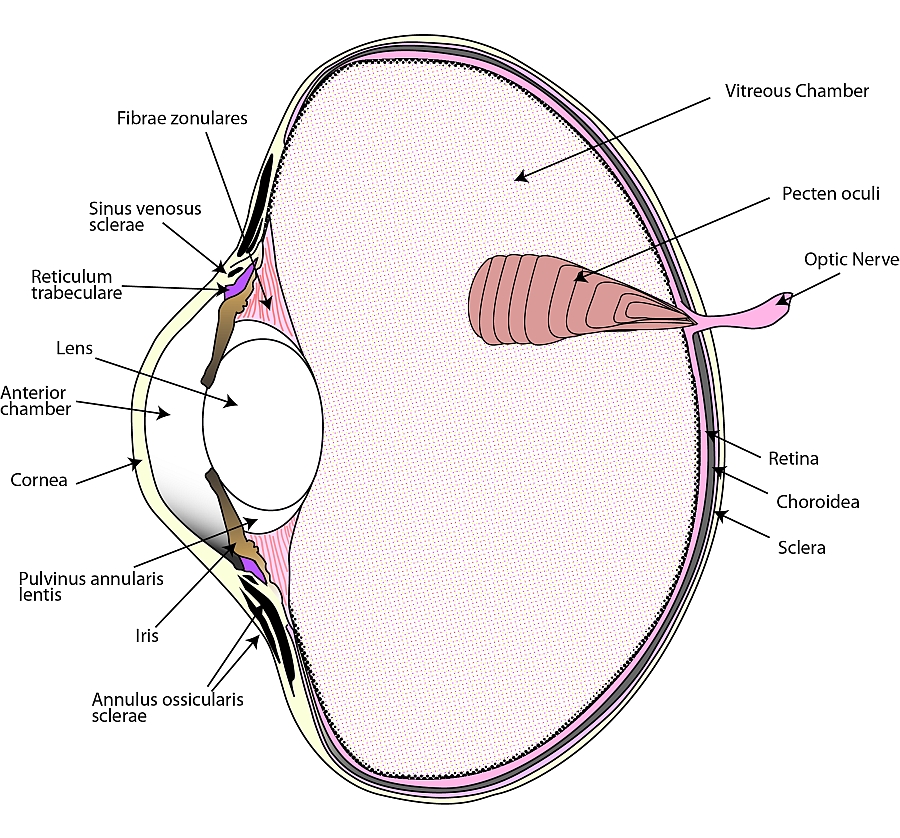 The eye of the fowl is fairly large in relation to the size of the bird. There is one eye on each side of the face and only a 26° angle directly to the bird’s front has binocular vision (Binocular vision occurs when both eyes see an object. This is an important aid to distance perception). There are two main eyelids and a third very thin membrane called the nictitating membrane, which is located in the front corner of each eye. While the eye is open, this membranous “eyelid” is only partially visible. It is capable of covering the eyeball with a very fast movement to provide protection to that organ.

The fowl’s eye is very similar to the mammalian eye, except that fowls have a higher threshold of light intensity at which they see than do some other birds and mammals. This makes them active during the day (diurnal) rather than at night (nocturnal). At night in nature, or in a free ranging situation, chickens seek the protection of trees to sleep.

Perception of the environment

The eyes play an important part in the bird’s perception of the environment and it is believed they see colours in much the same way as do humans. One exception in the structure of the eye is the presence of pectin which is believed to have the function of retaining acuity, or sharpness of vision, even after long periods of fixed staring.

The eyes function by projecting the image of the “seen” object through the lens of the eye onto the retina. Located on the retina are the receptive rod and cone cells, and the image is “seen” by these cells. It is then transmitted by the optic nerve as a “signal” to the optic lobes of the brain where the signal is recognised for what it is – the image of the object being “seen”. Special muscles associated with the lens change the shape of the lens to control the focus of the eye onto objects at different distances.

The fowl’s eye is well supplied with tears that drain from the eye into a collecting sac and then into the nasal cavity via a special duct. A very fine, sensitive, transparent membrane called the conjunctiva covers the surface of the eye ball and the inside of the eye socket. This membrane can become inflamed and/or infected if the bird contract conjunctivitis. 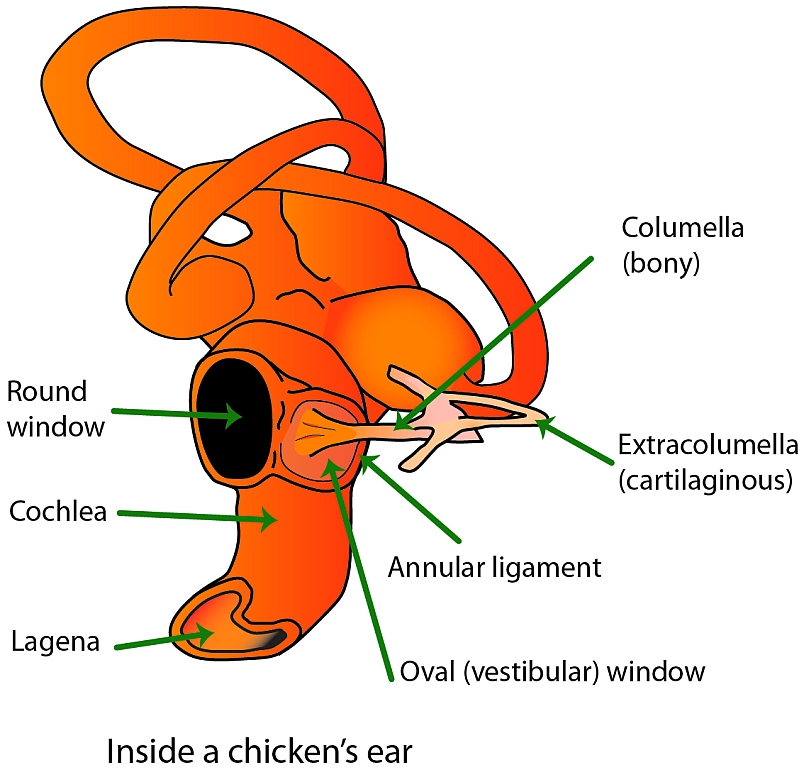 Right ear of a chicken including semicircular canals

The ears of the fowl are located on each side of the face behind the eye. While the ear is very similar to that of mammals, there are some differences. The fowl’s ear does not have a pinna, ear flap or lobe and the three bones of the mammalian middle ear have been replaced by a single structure of bone and cartilage.

The outer ear consists of the ear canal. Unlike the mammalian ear there is no pinna to direct the sound waves into the ear canal but it is covered by a tuft of feathers to protect it from dust and other potentially harmful materials.

The inner ear consists of the cochlea in which special nerve endings are located that receive the sound waves for transmission to the area of the brain associated with hearing. Also located in the inner ear are the semicircular ducts that are associated with the maintenance of balance. A special duct connects the middle ear with the roof of the mouth with the ducts from each ear joining before entering the mouth. The function of this duct is to regulate the air pressure in the middle ear to that of the outer ear (the environment) to prevent air pressure injury to the tympanic membrane.

The fowl hears by sound waves that enter the outer ear canal and apply pressure in waves on the tympanic membrane. The wave-like nature of sound causes the tympanic membrane to vibrate. This vibration is transmitted by the columella to the cochlea where special nerve endings receive it and transmit it by the auditory nerve to the brain where it is recognised as sound.

This is the organ of smell. In fowls, it is not very highly developed and it is believed that smell is of secondary importance to the other senses in the location and choice of food. The loss of a chicken’s ability to smell does not seem to influence either its selection of food or other behaviour.

The taste buds in the fowl are located at the base of the tongue and on the floor of the mouth. They contain nerve endings from the glossopharyngeal nerve. Small quantities of the chemicals of taste are recognised by the taste buds and this information is transferred to the appropriate receptors of the brain. Fowls have shown that the taste of materials in the dry state is weaker than when in the liquid state and they are more likely to refuse something on the basis of taste when it is in the water than when it is in their food. This has important application when using strong tasting medications to treat disease.

An important feature is the sensitivity of the fowl to the temperature of its drinking water. They are likely to reject water with a temperature above approximately 33oC and in any case, the provision of cool water in hot weather is an important strategy to help reduce the effects of heat stress. They will drink water that has a very low temperature even just above freezing point.