There were no official government records until the mid-1960s, so the exact time when intensive poultry production began is not known. However, industry sources estimate that three million meat chickens were produced in 1951. Most commercial meat chicken farms are intensive, highly mechanised operations that occupy a relatively small area compared with other forms of farming. Commercial broilers are raised on litter floors (e.g. rice hulls, wood shavings) in large poultry sheds. Australian broilers are not kept in cages, regardless of the production system used. The main production systems are generally referred to as conventional, free-range and organic. 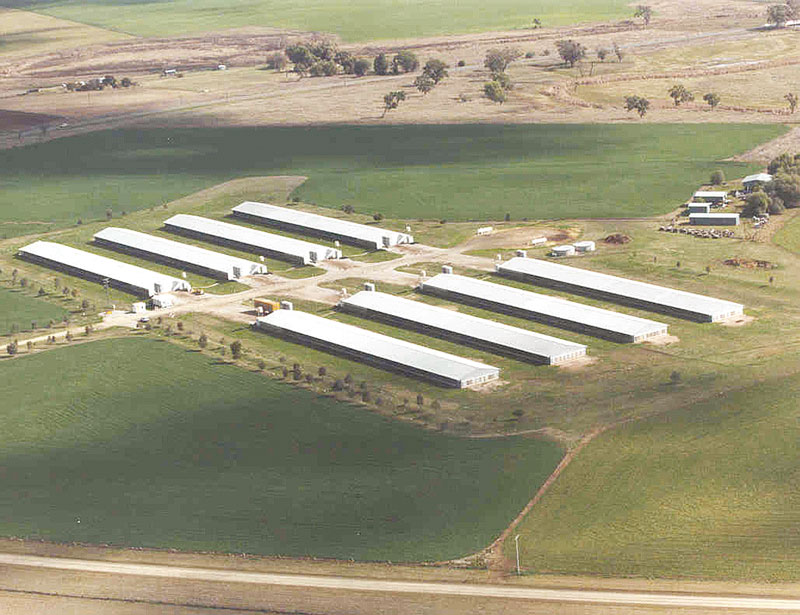 History of the meat chicken industry

The rapid expansion of the poultry industry took place in response to demand during the 1950s. Most production during this time was in the hands of ‘backyard’ producers and larger family operations. The larger operations were often involved in the production of chickens as an offshoot of their egg-producing activities as well as being producers and/or distributors of other livestock. The birthplace of the commercial industry was the outer Sydney metropolitan area, although other centres of commercial production quickly appeared near other major population centres.

In the decade 1950/51 to 1960/61, the size of the industry increased almost sevenfold. In the early 1950s, the first real efforts were made to develop an Australian meat chicken breed, resulting in the release of Australia’s first scientifically bred meat chicken strain in 1959. With the introduction of continuous chain processing systems, the processing of chickens became faster and more efficient and the resultant economies saw a rapid fall in the price of chicken to the consumer.

As a result of these developments and the rise of the ‘integrator’ in the industry, further expansion of the commercial industry occurred during the 1960s. These vertically integrated companies (fashioned on the highly successful US meat chicken company model) owned chicken breeding and hatching operations, feed mills and chicken processing plants and contracted out the growing of chickens from day-old to slaughter weight to ‘contract growers’.

The establishment of Kentucky Fried Chicken in Australia, with its first store opening in 1968, had a major impact on the consumption of chicken. In the 12 months from 1970-1971, a total of 75 stores were opened and during the same period, total Australian production increased by 38%.

Coupled with further improvements in the genetic material available, refinement of the nutrition and husbandry of broiler chickens, improvements in processing technologies and further growth in demand, the industry’s output increased more than five-fold in the 1960s and more than doubled again in the 1970s. It has continued to grow steadily, although less spectacularly, over the past 30 years.

Before 1960, the traditional roast chook eaten on special occasions was either a spent layer (boiler) or a male from a layer strain which was reared to about 12-14 weeks of age, especially for meat production. These male birds were crossbred layer strain birds, resulting from mating White Leghorn (WL) cockerels with Australorp (AL) hens. These are usually described in the industry as WL x AL, with the breed name of the cockerel being placed first and that of the hen last.

Structure and ownership of the meat chicken industry

The meat chicken industry now operates largely through vertical integration, with company ownership of breeding farms, multiplication farms, hatcheries, feed mills, some broiler growing farms and processing plants. Three large integrated companies supply about 80% of broiler chickens marketed in Australia. The biggest of these three companies is Inghams Enterprises, followed by Bartter Enterprises and Baiada. All three of these companies are privately owned and each has farming and processing operations in at least three states. The balance of output is shared among seven medium-sized companies (each supplying between 1-3% of the market nationally), and a myriad of smaller processors.

Processing companies generally contract out the growing of their broiler chickens to contract chicken growers. These growers own the farm and provide the management, shedding, equipment, labour, bedding and other inputs for the rearing of the chickens. The processing company provides, and at all times owns, the chickens and provides the feed, medication and technical advice. Contract growers are paid a growing fee which currently varies from 59-73 cents per bird. The terms and conditions of the grower contracts, as well as the growing fees, are established by state government constituted committees in some states, or by negotiation between growers or groups of growers (under authorisation by ACCC) and companies in other states.

The payment generally includes a performance-based component. Approximately, 800 growers produce about 80% of Australia’s meat chickens under contract to processing companies. The majority of meat chickens are produced on large company farms, or on farms owned and managed by ‘intermediary’ companies which own a number of farms, each managed by a farm manager, and who enter into contracts with the processing companies to grow out chickens on a larger scale. The three major poultry producing companies also own their own breeding farms, supplemented by some contract operators, and supply eggs to their company’s hatchery. These companies also own their own feed mills in at least some of the areas in which they operate and have their own laboratories to test samples for common poultry pathogens and other bacteria. Several companies have their own research farms. A number of the medium-sized companies also possess their own parent breeding farms and, in some cases, hatcheries. Each of the larger companies operating in the industry also has a product research and development facility.

outlets. Brands range from nationally recognised names to state recognised names and house brands. Numerous smaller processors also market chicken either under their own particular brand or in some cases without any brand identification, other than their name and address on the original packaging.

Major centres of chicken meat production have developed adjacent to the major capital cities, although the industry is becoming more regionalised as those areas become increasingly urbanised. Poultry processing plants, together with all the other component activities in areas in an integrated operation, have developed in proximity to markets and a ready source of labour. Many of the largest operations are established in, or within a 50 km radius of capital cities. The obvious advantages are in distribution costs associated with transport of the end product, labour availability and services.

Hand-in-hand with the siting and location of poultry processing plants is the siting and location of chicken grow-out farms. Processing companies, either totally integrated or independent processors, prefer the meat chicken growing farms that supply them to be located relatively close to the processing plant – preferably within about a 100 km radius, or two hours travelling time, of the plant. As with any farming operation, certain factors are desirable, if not essential, including:

Smaller pockets of chicken meat production are found in the northeast corner of NSW surrounding Byron Bay, Mareeba in Queensland and Tasmania. 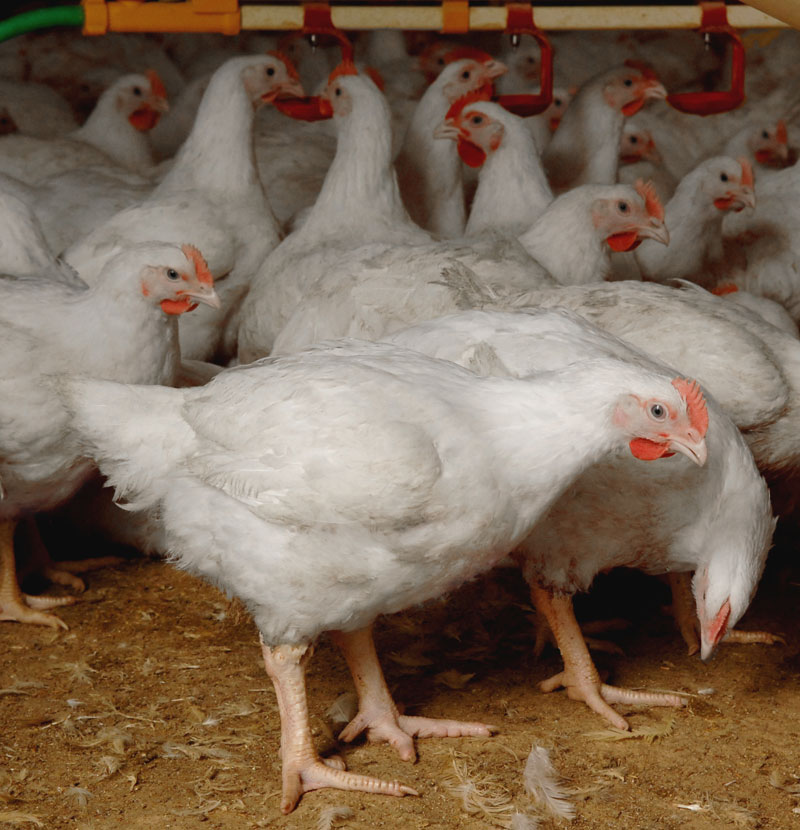 There has been tremendous improvements in the genetic potential and nutrition of meat chickens over the past 50 years. Meat chickens today can reach a weight of approximately 2.2 kg in 35 days while consuming only 3.3 kg of feed. Genetic selection is still leading to improvements in performance and the time it takes to reach market weight is gradually becoming shorter.

Why do chickens grow to market weight so quickly?

Around 50-60% of the improvement in growth rates since the start of intensive poultry farming is due to improved breeds of chickens. This genetic gain, which has been achieved through conventional selective breeding, is due to:

A further 20-25% of the improvement in growth is due to improved nutrition. For current meat chicken breeds, the requirement of nutrients such as energy, protein, essential amino acids, vitamins and minerals at each stage of its growth has been studied precisely. For each feed ingredient, the levels of these nutrients digestible by the chicken has also been established. With this information, feed can be formulated to match the chicken’s precise nutritional requirements throughout its life cycle without excesses, thereby optimising growth and feed efficiency. Other gains made in meat chicken growth and performance are due to better husbandry techniques and health management.

Wet litter is a worldwide problem (including Australia) for fast-growing meat chickens in a deep litter system. It is important to maintain the litter in a dry and friable condition in meat chicken houses. Wet litter increases odour and ammonia emissions, resulting in poor performance and welfare of birds, which affects the product quality due to breast blisters and foot pad dermatitis in birds.

(This content has been provided by Dr Vivien Kite, Australian Chicken Meat Federation)