Modern intensive poultry production has achieved phenomenal gains in the efficient and economical production of high quality and safe chicken meat, eggs and poultry bioproducts. At the same time as making gains in production and efficiency, the industry has had to maximise the health and well-being of the birds and minimise the impact of the industry on the environment. The use of feed additives has been an important part of achieving this success.

The diet of animals and humans contain a wide variety of additives. However, in poultry diets, these additives are primarily included to improve the efficiency of the bird’s growth and/or laying capacity, prevent disease and improve feed utilisation. Any additives used in feed must be approved for use and then used as directed with respect to inclusion levels and duration of feeding. They are also specific for the type and age of birds being fed. These guidelines are maintained by a government committee (Product Safety and Integrity; Australian Government Department of Agriculture, Fisheries and Forestry).

Common feed additives used in poultry diets include antimicrobials, antioxidants, emulsifiers, binders, pH control agents and enzymes. Sometimes diets will also contain other additives used in diets for humans and pets such as flavour enhancers, artificial and nutritive sweeteners, colours, lubricants, etc. Within each one of these classes of additives, there can be dozens of specific additives manufactured and distributed by a wide variety of companies. Again, all ingredients and additives must be noted on the label and their use and inclusion levels meet the standards as defined by law. In some instances, additives are added to the animal’s diet in order to enhance their value for human consumption, but mostly this is accomplished by use of natural ingredients containing significantly higher levels of these nutrients that can be deposited directly into meat and eggs. This fact sheet will highlight a few important feed additives and their use in the poultry industry. 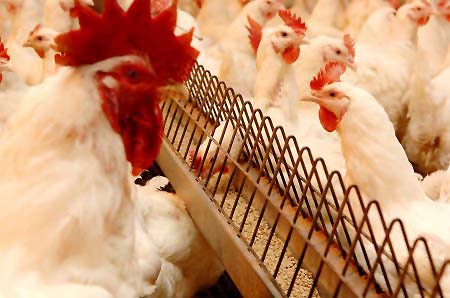 Growth promoting hormones are not used in the poultry industry. The efficient growth and egg productivity of commercial poultry has been achieved over the last 50 years through traditional animal breeding techniques (genetic selection – not genetic engineering) and improved nutrition and management (including health and housing) practices.

Antimicrobials have been used extensively in intensive poultry operations to minimise disease and improve growth and feed utilisation. However, the industry is currently evaluating alternatives to chemical therapeutics. It should be pointed out that antimicrobial practices do not extend to the production of commercial eggs (should a need for antimicrobials arise all eggs laid during the treatment and withdrawal period cannot be sold) and the meat industry must adhere to stringent guidelines with regard to drug withdrawal periods before marketing.

There is much controversy in regard to the impact of antimicrobials in animal diets on the development of resistant strains of microbes that could directly impact human health and carry over into meat and bioproducts as well as the negative impacts associated with their excretion into the environment. The European Union has moved towards a complete ban of in-feed antimicrobials for these reasons since 2006. Development of alternatives to the present in-feed antimicrobials is an exciting area of current research worldwide. In all cases, it will be necessary to minimise disease challenges, strengthen the bird’s natural defences (immune response, gut barrier/health) and optimise the diet to provide a balance of required nutrients for the bird’s changing needs. All of these may be influenced by using feed additives. Alternatives to in-feed antibiotics mainly include acidifier, probiotics, prebiotics, herbal products, immune-modulators and also feed enzymes.

Enzymes are proteins that facilitate specific chemical reactions. After completion of the reaction, the enzyme disassociates and becomes available to assist in further reactions. Although animals and their associated gut microflora produce numerous enzymes, they are not necessarily able to produce sufficient quantities of specific enzymes or produce them at the right locations to facilitate absorption of all components in normal feedstuffs or to reduce anti-nutritional factors in feed that limit digestion.

Some cereal grains (rye, barley, wheat, sorghum) have soluble long chains of sugar units (referred to as soluble non-starch polysaccharides – NSP) that can entrap large amounts of water during digestion and form very viscous (thick gel-like) gut contents. Enzymes that are harvested from microbial fermentation and added to feeds can break these bonds between sugar units of NSP and significantly reduce the gut content viscosity. Lower viscosity results in improved digestion as there is more interaction of the digestive enzymes with feeds and therefore more complete digestion; improved absorption as there is better contact between the digested feed nutrients and the absorptive surface of the gut; and improved health as the moisture and nutrient levels in the manure are reduced which reduces the nutrients available for harmful gut microflora to proliferate and challenge the birds (e.g. necrotic enteritis, a chronic intestinal disease caused by Clostridium perfringens, resulting in reduced performance, mortality and the main reason we currently use in-feed antimicrobials).

Commercial enzymes are also produced that significantly reduce the negative effects of phytates. Phytates are plant storage sources of phosphorus that also bind other minerals, amino acids (proteins) and energy and reduce their availability to the bird. Ongoing research will develop enzymes that are more effective in maintaining function under a wider range of processing and digestive conditions. New enzymes may include those capable of reducing toxins produced during feed spoilage (mould growth in grains) and facilitating digestion of carbohydrates currently not available to simple-stomached animals (poultry, pigs, humans) such as cellulose, lignin and chitin. New feed additives are rapidly adopted by the poultry industry and have facilitated the development of significant new technology to advance the use and availability of in-feed enzymes.

There are a variety of sources of reactive oxygen species (free radicals) in normal metabolism as well as those coming directly from feed ingredients. Oxidative stress can disrupt normal cellular function, damage tissues (also associated with the development of cancers) and reduce health status. Antioxidants bind these molecules and reduce their potential damage.

Feed acidifiers are added to the feed to lower the pH of the feed and consequently the gut environment. A lower pH has the potential to inhibit or partly restrict the growth of pathogenic intestinal microbes. Acidifiers exist both as organic or inorganic acids or associated salts. They can exert their antimicrobial action both in the feed and throughout the gut.

Health and performance promoting effects have been shown for a number of organic acids such as formic, fumaric, citric, propionic and lactic acids.However, the overall benefits of organic acids greatly depend upon the form of administered organic acid (protected or unprotected), uncontrolled variables such as buffering capacity of ingredients, presence of any other microbial agent, cleanliness of production environment, and heterogeneity of microbes.

Probiotics are defined as live mono or mixed culture of microorganisms which are non-pathogenic, resistant to gastric and bile acids, and when ingested can beneficially affect the host animal by improving the characteristics of intestinal microbiota. The main proposed modes of action of probiotics include 1) antagonistic action towards pathogenic bacteria by secretion of products which inhibit their development, such as bacteriocins, organic acids and hydrogen peroxide; 2) competitive exclusion which represents competition for locations to adhere to the intestinal mucous membranes and in this way pathogenic micro-organisms are prevented from inhabiting the digestive tract; 3) competition for nutritious substances. Probiotics have also been reported to exhibit immunomodulatory properties mostly through manipulation of gut microbiota composition and consequently affecting both innate and adaptive immunity.  In this way, they create conditions in the intestine which favour useful bacteria and inhibit the development of pathogenic bacteria.

Prebiotics are defined as indigestible food ingredients which stimulate the growth or activity of a selected number of bacteria in the gastrointestinal tract of the host animal. When entering the gut, prebiotics serve as a substrate for the endogenous beneficial bacteria thus can promote competitive exclusion of pathogenic microbes and selective colonization by beneficial microbes. Among the known prebiotics, mannan-oligosaccharide (MOS) fructo-oligosaccharide (FOS) and galacto-oligosaccharide (GOS) have extensively been tested in poultry. Prebiotics proposed mechanism of actions include: 1) lowering gastrointestinal tract pH through lactic acid production; 2) inhibiting the colonization of pathogens and 3) producing a systemic effect on stimulation of immune responses.

Many additives are a normal part of diets for animals and humans. It is only recently that we have come to recognise and understand their importance in achieving high production and efficiency, maintaining health and wellbeing, improving product quality and safety and reducing the industry’s impact on the environment. More work is required to further identify the positive effects of additives and minimise the negative effects they may have if not used correctly or if they interact with other additives or feed ingredients. In particular, additives will play an essential role in maintaining the health of poultry in an era of no pharmaceuticals.