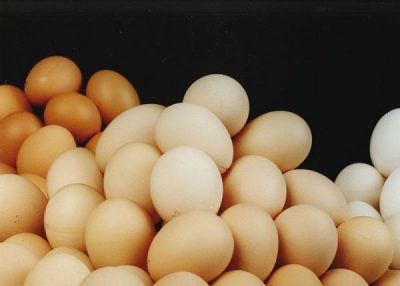 Chicken eggs and egg products have traditionally been, and still are, a popular part of the human diet. The egg is formed in the reproductive organs of the female chicken. Most commercial strains of hen can lay over 260 eggs per year and some improved breeds can lay over 300 eggs in a year – this is almost an egg every day. It is not necessary for a hen to mate with a rooster before she can produce an egg. Modern types of hen have been bred so that they will lay even if there is no chance of producing a chick. Layer chicks are sexed and the females are sold as future layers and the males are humanely killed. 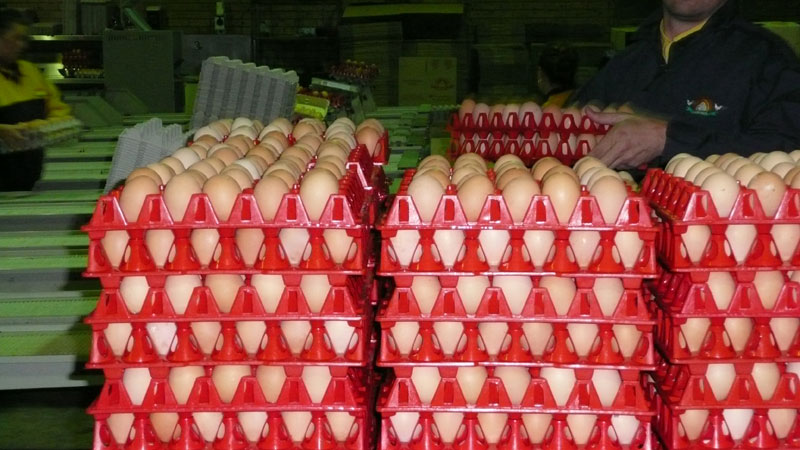 Eggs are collected as soon as possible after being laid and are held in cool storage to protect internal quality. Farmers check eggs for quality using a special lighting (candling) system. Cracked or weak-shelled eggs and other abnormal eggs are discarded. A sample of each batch of collected eggs is checked for internal quality and freshness.

The eating value of eggs has long been recognised. An egg contains 12% shell (which is not eaten), however, the remainder of the egg is a mix of protein, energy, minerals and vitamins. This means that eggs are a highly nutritious food that forms part of a good mixed diet. Eggs contain cholesterol, which has been seen in the past as an undesirable characteristic. However, this issue has been simplified as there are ‘good’ and ‘bad’ forms of cholesterol and eggs have been shown to increase the ‘good’ form of cholesterol in the blood of people who consume eggs (Djousse and Gaziano (2008) AJCN, 87(4):964-969). Reports suggest that the consumption of eggs every day is not associated with an increased risk of coronary heart disease. Eggs also contain many other beneficial fats and amino acids. Some producers have marketed specialty eggs which are fat modified (omega-3 enriched). This is done by feeding hens on a specially selected diet.

The farmer who produces eggs is commonly referred to as an egg producer.

There was once a time when every farm and many suburban households had a few chooks scavenging in the yard, getting some household scraps, and sometimes getting a handful of wheat each day. This method of farming is called extensive. The number of these farms decreased as intensive farming methods developed, allowing one person to care for large numbers of birds.

Until the 1950s, commercial egg producers had a few hundred to a few thousand hens housed in a shed with access to a yard surrounded by a 2 m high wire netting fence to keep foxes away. These were called semi-intensive farms and were often located in country areas close to the source of feed ingredients, especially wheat. Similar semi-intensive farms of a few thousand birds had become popular on the outskirts of major cities by the middle of the 1950s. This location was favoured because it was closer to the city market, where most eggs were sold.

Intensive production means large numbers of animals are kept in a small area. With the introduction of layer cages in the 1960s, farms became more intensive and larger flocks, up to 15,000 birds, became common. In 1979, there were 3200 layer farms in Australia but by 1986 this number had reduced to 1700. A few very large farms, with up to 100,000 birds, developed in the 1970s. Today some farms have up to 500,000 hens in multiple level sheds. 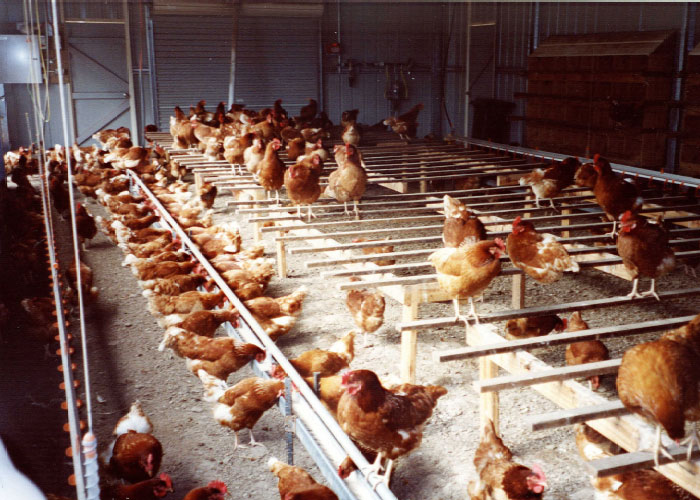 Location of egg farms in Australia

The distribution of poultry farms is determined by population (where the people who will buy the eggs are living) and by the location of feed ingredients, mainly cereal grains, for the hens. It is less costly to transport eggs than it is to move the feed for hens.

The free-range egg production is increasing in Australia as the consumers have more concerns on welfare issues when birds are kept in cages. Organic eggs are purchased by people who value the ethos behind organic agriculture. Special rules were developed to identify farms which are truly free-range or barn eggs so that buyers can be sure they are getting the products they are paying a premium for. Free-range eggs require hens to have meaningful and regular access to an outdoor range, with outdoor stocking density of no more than one hen per square meter or 10,000 hens per hectare. The organic egg industry also has a comprehensive set of regulations they must abide by to maintain their organic certification.

1927 – State governments established egg marketing boards because a large number of small egg farmers found it difficult to bargain with the small number of large egg buying companies. The board members were mainly egg producers. The egg boards enabled farmers to set egg prices within government price control regulations. The marketing boards in each state were legally obliged to buy all eggs a farmer produced and a farmer was not allowed to sell any eggs without the agreement of the board.

The 1970s – By 1970, farmers had applied a lot of scientific knowledge and had become very efficient at egg production. This efficiency meant that they eventually produced more eggs than the boards could sell. It was then decided to give additional power to the boards to enable them to control the number of hens which a farmer could hold. This method of production control took some time to work, as farmers had applied scientific knowledge and improved the efficiency of egg production from each hen so dramatically that over-production continued to be a problem for some years.

Production control was achieved by issuing free licenses to keep hens, called hen quotas. As farmers wished to expand, they needed to buy additional quota and the price increased by $18.00 per quota at one stage. This made it difficult for new farmers to get into the industry. During the 1980s some farmers refused to limit their bird numbers and consumers felt that prices were being kept high by the use of the quota system. As a result, governments in NSW and SA deregulated the industry and disbanded the egg marketing boards, with Victoria following.

Egg production now operates as a free market with supply and demand determining prices. The idea is that efficient producers are able to produce quality eggs at a reasonable price while inefficient producers are forced out of the business. Larger producers are generally favoured because they can usually produce eggs at a lower cost than small producers. Except for small specialty markets, there seems to be little opportunity for small commercial farmers to compete with large scale producers in the general market and this could be said for all egg production systems. Refrigerated trucks make the transport of eggs very easy.

The average cost of egg production is approximately 95 cents per dozen or around $1.45/kg. Some of the factors which affect this cost are: