Darkling beetles (Alphitobius diaperinus), also known as lesser mealworms, are common cosmopolitan insect pests of broiler houses where they often occur in large numbers in the bedding litter material that is used on the floors. In Australia, the floors of these houses most often consist of compacted earth and the litter bedding material is usually wood shavings. Because of the beetle’s natural association with animals, in particular birds, this tropical species is well suited to the conditions that occur in broiler houses. 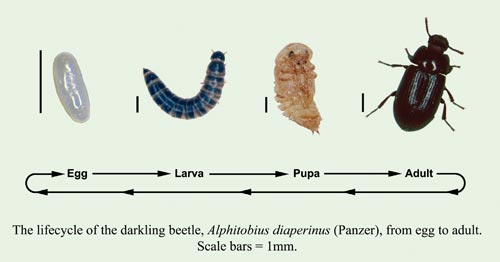 Typically, darkling beetles lay eggs in the bedding litter producing larvae (lesser mealworms) that live in the litter, predominately under feed pans. These larvae then burrow into the earth floor of the broiler house to pupate, and from these pupae, the adult darkling beetle emerges. Earth floors of broiler houses are an important medium for pupation but darkling beetles still occur, albeit in smaller numbers, in broiler houses with higher density flooring materials such as concrete or bitumen.

Despite darkling beetles occurring in most broiler houses throughout the world, the effects that these infestations have on poultry production are difficult to quantify.

In Australia, infestations contribute to:

Darkling beetles are known vectors and reservoirs for a number of serious poultry disease agents (Leucosis, Marek’s disease, Infectious bursal disease, Reovirus, Enterovirus, Fowlpox and Newcastle disease) and can act as intermediate hosts for caecal nematodes, tapeworms and protozoa. In addition, they can transmit a number of foodborne pathogens such as Escherichia coli and Salmonella typhimurium and have been recently implicated in the transmission of Campylobacter. Thus, the large populations of the pest that are prevalent in most broiler houses are a bio-security threat to the welfare of the flock and the production of safe food.

The loss of chicken feed in broiler houses by the pest readily consuming spilt feed increases production costs, while feeding on lesser mealworms in preference to feed lowers bird nutrition. In addition, feeding on beetle larvae directly increases the likelihood of ingesting disease organisms or parasites.

No acceptable field control strategies have been developed for darkling beetle control and therefore there has been little long term success in controlling the pest. Research in Australia has shown that the current standard industry insecticide is not effective when applied to broiler house floors, and this situation is exacerbated by strong and widespread insecticide resistance that occurs in broiler house beetle populations. More research is underway to develop an effective method to control darkling beetle in poultry houses.

For more information, refer to the reading list below.

Common problems and treatment methods for…