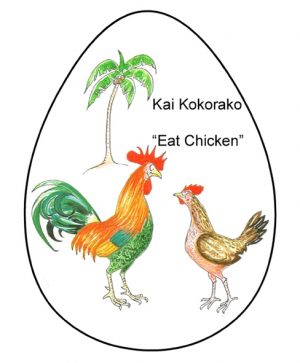 Sustainable Village Chicken Keeping for Pacific Island Communities is the objective for Russell Parker’s Kai Kokorako Perma-Poultry initiative, particularly in the Solomon Islands east of Papua New Guinea. Through the use of simple improved poultry husbandry principles as promoted by Kai Kokorako Perma-Poultry, village chicken production can be quickly increased so there is much more meat and eggs to supplement the peoples’ meals. Surpluses of meat, eggs and live birds can all be easily sold to provide small cash incomes for family needs like school fees, kerosene for lighting or other important necessities.

“Kai Kokorako” means “Eat Chicken” in Pidgin English and “Perma-Poultry” indicates the use of permaculture principles in the improvement activities.

Over 80% of the 500,000 population of the Solomons live in a rural subsistence lifestyle, with village poultry the primary source of dietary protein.

More than 30% of the children are malnourished and the population generally is protein starved. The main thrust of the project is the implementation of a training manual through the training of village trainers, as well as villagers themselves, right across the country.

The training manual is now available in hardcopy, CD and online through the nine Distance Learning Centres (DLC) of the Solomon Islands Schoolnet program.

Regional poultry breeding and training centres are also being established across the country to provide both practical experience to complement the theory of the training manual as well as breeding stock for each training workshop or new village site.

This development has been identified by both AusAID and the Solomon Islands Govt as crucial for the future of the country. However, at present, the Department of Agriculture does not have the facilities or capacity to carry out this work.

A village poultry relief program for the victims of the April 2007 Tsunami/Earthquake disaster in the western part of the country still has to be completed once the Distance Learning Centre at Sasamungga rebuilt. The initial efforts of the relief project were ineffective because of the lack of quality trainers and the necessary replacement stock so my continued efforts are urgently needed.

Several training workshops are being conducted from my home computer through various DLCs at the moment.

“Champion teachers” have been seconded by Schoolnet from nearby Rural Training Centres (RTC), Colleges and Schools as well as the Dept of Agriculture to act as local tutors for the subject.

A specialist breeding centre (SBC) for Naked Neck chickens is already operating very successfully on the remote NNW atoll of Ontong Java. The intention is to massively increase the progeny of the flock so they can be distributed right across the country to the other planned regional BTCs.

This SBC has recently come under serious threat from flood tides which have spoilt the peoples’ food crops and freshwater supply on the low lying atoll and moves are afoot to attempt to rescue a good portion of the Naked Neck breeding stock for dispersal and preservation around the country.

Honiara Based Breeding Hatching Facility early plans have been made for an urgently needed Village Poultry Breeding and Hatching facility in the capital Honiara to meet the high demand for these chickens from across the country. No such facility currently assists as the official Govt station was destroyed during the Ethnic Conflict. The only day old chicks available are hybrid layer or broiler chicks which are not suitable for harsh village life or as tasty a meat bird to suit the high ex-pat Chinese market.

A Simple Guide to Managing Village…