Home » All About Poultry » Species » Turkey 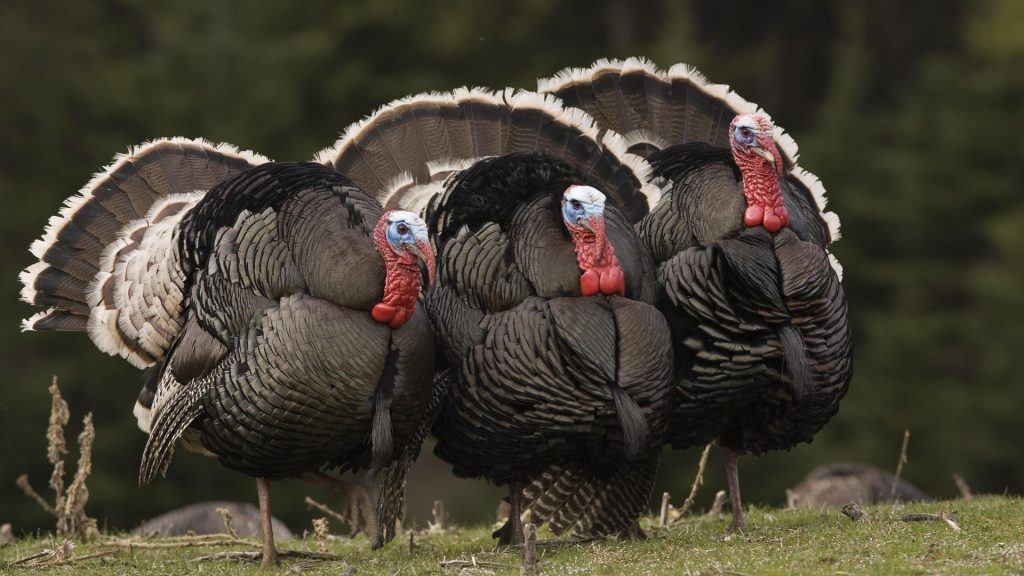 Turkeys are native to North America. They are a type of poultry that belong to the order Galliformes, along with chickens. There are two species of wild turkey: the North American Wild Turkey (Meleagris gallopavo) and the Central American Ocellated Turkey (M. ocellata). Global turkey meat production is about 5.7 m tonnes/year. Of this, over 60% is produced in North America, which is the turkey’s native home. The undomesticated turkey (Melagris ocellata) can still be found therein remote areas. Although domesticated over 500 years ago, it was only in the 20th century that turkeys were exploited for their meat. Prior to this, turkeys were selected for their plumage and exhibited in poultry shows. Turkeys were taken to Europe by the Spanish, who had found them as a favourite domesticated animal among the Aztecs. The Aztecs used turkeys as a source of protein (meat and eggs) and used the feathers for decoration.

As with many galliform species, the female (hen) is smaller than the male (tom or stag), and generally less colourful. Turkeys have wingspans of 1.5–1.8 meters (almost 6 feet) and male turkeys have a distinctive fleshy appendage that hangs from the beak, called a snood. The usual lifespan for a turkey is 10 years, and pure breed turkeys take approximately 4-5 months to grow to full size. The hen turkeys take 16 weeks to mature completely, and average 3.6 kg (8 lb) to 7.2 kg (16 lbs) in weight. The tom turkey takes approximately 19 weeks to mature and weighs between 7.2 kg (16 lbs) and 10.8 kg (24 lbs). Larger tom turkeys may weigh up to 18.1 kg (40 lbs), but take a few more weeks to mature. A breeder tom turkey can generate up to 1,500 poults in a hen’s six-month laying cycle.

While some pure breeds of turkey are maintained by poultry fanciers, the turkeys raised commercially for meat are specially bred hybrids (a cross between two or more different breeds). Commercial turkey breeding has resulted in hybrid strains that grow much faster and convert feed to bodyweight much more efficiently than pure breeds. Under ideal conditions with a well-balanced ration, a modern white hybrid turkey can reach 6 kg in weight by 10 weeks of age, with a feed conversion ratio (the ratio of the amount of feed eaten to body weight gain) of about 2:1. Commercial turkeys are bred specifically to have more meat in the breast and thighs. White feathered turkeys are generally preferred since they do not have unsightly pigment spots on the skin when plucked.

The tom carries a ‘wattle’ – a skin flap down the neck; below this is the carbuncle which changes colour during courtship. Turkey meat is eaten year-round in the US and is the traditional dish at Thanksgiving and Christmas. Breast meat is 70% of the carcass value and 73% of carcass yield followed by thigh meat (13%). Breast meat has only 1% fat. Turkeys are much more difficult to farm than broiler chickens, especially in the early stages. Slaughter weight will depend on end use (table, restaurant or further processing), and in the US the meat is very competitively priced. Toms now have so much breast meat that they are unable to mate, and as a consequence, the hens are artificially inseminated. Fast growth and a focus on breast meat, has placed pressure on their legs which have not developed as rapidly. Therefore, skeletal disorders, especially tibial dyschondroplasia (in the leg bone), are commonly seen, although there are other contributing factors related particularly to nutrition, such as insufficient vitamin D3.

Approximately 45 – 60 poults are produced from each hen annually. Very early mortality can be high and may be related to hatchery hygiene, which results in yolk sac and navel infection and refusal to eat and/or drink. Although there are several breeds, the white-feathered hybrid is now commonly used in an industry dominated globally by two breeding companies with 75% of market share.

The Turkey Industry in Australia

In Australia, the larger hatcheries supply contract growers while there are some smaller hatcheries which provide day-old turkey poults to backyard poultry keepers. The main commercial turkey used in Australia is the hybrid white bird which are the progeny of specially selected male and female parent stock. The males are chosen for their body conformation and fast growth rate while the females are chosen for their lack of broodiness, egg-production ability, and growth rate.

Information on breeding and keeping of turkeys for small backyard producers can be found at The Poultry Site, which contains an article written by Gerry Bolla, NSW Agriculture Livestock Officer (Poultry).

Australia’s turkey production in recent years (2013) has been at around 22,500 tonnes/year which is well below the 36,400 tonnes produced in 2007. The industry generates over $200 m/year from almost 5 million birds processed. The Australasian Turkey Federation has over 20 members. There are three main producers: Inghams Enterprises dominates the market with, on average, 46,000 turkeys processed per week (60 to 65% of market share). The other two account for 15,000 and 10,000/week. At least one large producer has no breeding flocks and purchases eggs for incubation and all large producers have contract growers. In addition, there are several small producers, all of whom grow their own birds. There are five dedicated processing plants and approximately six that process turkeys and chickens. White, hybrid turkeys are used almost exclusively and, as elsewhere, artificial insemination is practised rather than natural mating. A hen may lay over 100 eggs/year but fewer than 90 poults will probably survive to processing weight from these eggs. Birds are held on separate breeder farms, each farm holding up to 7,000 hens. These layers are in flocks of up to 3,000 and are held in broiler sheds, typically 4 to 5 on large farms. Straw, wood shavings and sawdust are the bedding materials used. These are normally changed at the end of each batch. The main challenges in the industry include environmental control, egg production consistency, brooding of poults, litter management due to caking and aggravated by drinking water spillage.

Free-range turkeys, commanding a premium price, are produced on a few small farms. Some producers claim to have organically-grown turkeys but it is now difficult to obtain organically-grown feedstuffs and to conform to other requirements.

Rainbow Valley Turkeys, a major grower, produces about 650,000 turkey eggs/year. Many of these are sold to producers for hatching and some of the poults are purchased by small farmers for growing out. There is a small export market for eggs to Taiwan.

Demand for whole turkeys is mainly at Christmas and is usually for the smaller birds of 4.5 – 6.5 kg live weight. For large growers, this maybe only 10% of production and is predominately hens. For the rest of the year, demand is for further processed products, mainly from heavy toms, such as boned or semi de-boned products. These are cooked half breast, breast slicing roll, frozen breast roast, cooked buffe and thigh roast. Turkey meat, especially whole birds, is expensive in Australia compared to the US where it competes favourably with broiler meat. Reasons for this include the comparative scale of production, differences in seasonal demand, the cost of feed, and cheap labour. Feed contributes over 60% to the production cost, while the cost of raising the poults is about 15%.

Diets are specially formulated and hens are fed ad libitum, but toms are usually restricted from 16–18 weeks onwards. From the first 2-3 weeks poults are fed a high protein pre-starter diet, then a starter diet with declining levels of protein but increasing levels of energy in subsequent formulations to killing weight.

Hens are vaccinated against haemorrhagic enteritis, cholera and fowl pox. This affords immunity for the poults, which are normally not on a vaccination program. Blackhead is caused by a protozoan parasite that can be transmitted in drinking water, feed or excreta. It can be prevented by incorporating drugs in the feed.

Israel has the highest turkey meat per capita consumption of 11.25 kg, while for Australia this figure is 0.83 kg. Traditionally, turkeys are bought at Christmas and Easter as big birds, ranging from 2.5 to 5.0 kg plus in size (dressed weight). This requirement is slowly changing as families buy smaller one-meal birds at other times of the year. ‘Further processing’ of turkey portions is enabling the processor to attract a larger share of the consumer’s budget. The consumer can now buy over sixty different cuts of turkey and further processed turkey products such as turkey hams, steaks and sausages (smoked and broiled).