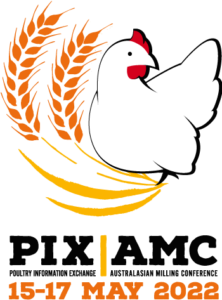 PIX/AMC is the pre-eminent livestock conference for
poultry, pigs, insects, feed and flour milling.
Everything is under one roof – 250+ exhibition booths
plus technical sessions on the latest advances.
Save with early bird and group discounts by
10 March 2022.

The conference theme, ‘Beyond 2020 – Feeding the Future‘ will provide a comprehensive program with the latest in innovation and information, featuring knowledgeable industry experts from Australia, New Zealand and overseas. The program will be streamed into chicken meat, egg production, free range and organic farming, flour milling and feed milling for all livestock species, including beef, dairy, pigs and others. Workshops on numerous special interest areas encompassing all aspects of the poultry industry will also be on offer.

The World’s Poultry Science Association (WPSA), established during the early 20th century, held its first official conference in 1921 in The Hague. It is held every four years in a different WPSA member country. Under the banner of The World Poultry Congress (WPC), it covers all aspects of poultry science and education, along with commercial exhibitions over three to four days. For more information about the WPC, please visit the official website of the WPSA at www.wpsa.com or search “World Poultry Congress + year” to find the specific website of the next conference.

The European Poultry Conference (EPC) is organised by various European branches of the WPSA and is held every four years in various European cities. This conference covers all aspects of poultry science and runs over two to three days.

The Australian Poultry Science Symposium (APSS) is an annual meeting held in February by the Poultry Research Foundation at the University of Sydney. It covers most aspects of poultry science, except those relating to health and disease, which are covered in the Australian Veterinary Poultry Association (AVPA) meetings. AVPA meetings are held biannually, with one immediately after APSS.  The websites for APSS and AVPA are: www.sydney.edu.au/vetscience/apss/ and www.avpa.asn.au where the meeting dates and venue are usually given well ahead of time.

The European Symposium on Poultry Nutrition (ESPN) is held every two years in various European cities sometime between July and September. ESPN exclusively covers poultry nutrition and thus attracts delegates from all across the globe. There is no single dedicated portal for this conference but it can be found easily with the search term “European Symposium on Poultry Nutrition”.

This is perhaps the largest poultry exposition in the world and is held in Atlanta, Georgia every January. It is known as the “Atlanta Poultry Show” by most industry people. The show attracts around 20 thousand visitors each year. Although its focus is trade display, concurrent seminars are conducted to cover various topics throughout the three day event.

The Asia-Pacific Poultry Conference (APPC) is organised by the Asia-Pacific Federation of the WPSA and is held every three years in various Asian cities. APPC covers all aspects of poultry science.