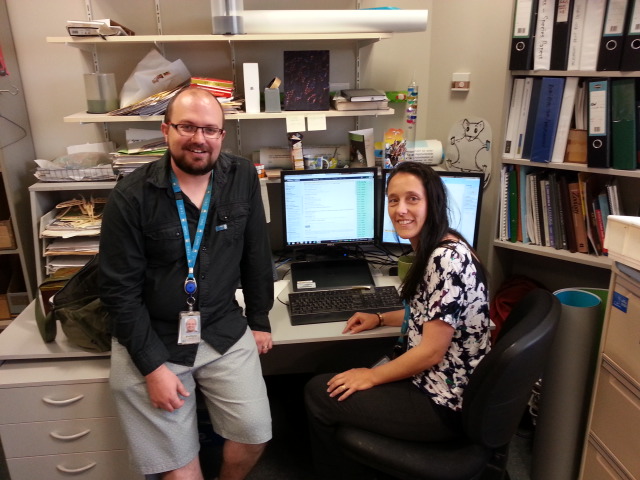 A commonly used biomarker of stress in avian species is measurement of corticosterone in blood, which is released by the adrenal glands when the bird’s body prepares for ‘flight’ or ‘fight’. Unfortunately, there are major practical difficulties with the measurement of blood concentrations of corticosterone as a biomarker of stress responses due to the act of sampling serum from birds. This can have a profound effect on corticosterone levels as early as 45 seconds after restraint of the bird for sampling purposes.

Dr Tamsyn Crowley and Anthony Keyburn lead a Poultry CRC research project aimed at developing a novel measure of welfare in laying hens through the use of microRNA (miRNA) markers in plasma, and more importantly eggs, as an indicator of acute and chronic stress. Recent studies investigating diseases in humans and other animals have shown clear differences in the expression patterns of miRNAs in serum and suggest that these are useful as biomarkers in a range of conditions, including welfare status. The background to this joint project between CSIRO, Deakin University, the University of New England and The University of Sydney was previously reported here.

Initially, the team had to set up protocols to create a quantifiable stress, as measured by the more traditional changes in plasma corticosterone level. Simultaneously they purified RNA from collected sera and measured/characterised RNA species using RNA sequencing technologies. They have managed to validate the ability of their chronic stress model to induce significant changes in sera RNAs.

They found 570 RNAs that were differentially expressed between chronic stress and control groups, including 4 known miRNAs (out of 373 miRNAs identified). “Many more (miRNAS) have good potential when outlier samples are not taken into account” said Tamsyn. “We have begun to look at the less stringent list of annotated miRNAs to see if we can identify more candidates”. Critically, the stress of the animals has an opposite effect on two of these miRNAs (miR-215 being decreased, while miR-2188 is increased with stress). The ratio of these levels clearly differentiates the two groups of animals. The use of miRNA ratios avoids the need for normalisation (of data) otherwise necessary when considering miRNAs affected in only one direction.

Anthony and Tamsyn are excited by the results obtained from the serum sequencing analysis showing there are miRNAs that are significantly different in expression between stressed and control birds. They have also identified miRNAs only found bioinformatically in birds with high corticosterone levels. Having now validated the lab model, they are looking to validate their findings in field samples. Samples from an extensive previous study by Dr Jeff Downing on corticosterone levels across a range of farming practices will be used for this purpose.

Additionally, the most imperative next step is to perform RNA sequencing on RNA from egg albumin and yolk. “We are in the process of sequencing egg samples in an attempt to identify miRNAs that may be specifically transferred into these samples” said Tamsyn. Having demonstrated the feasibility of their approach, research can now focus on determining its applicability to eggs.

The ultimate aim of this project is to develop protocols to be able to analyse eggs collected from various farms, to determine welfare with a minimum amount of impact on the birds. To date they have shown the great potential for the objective definition of animal welfare with this methodology.

Poultry’s part in moving to an Agricultural Competitiveness White Paper